The Art of Being Idle 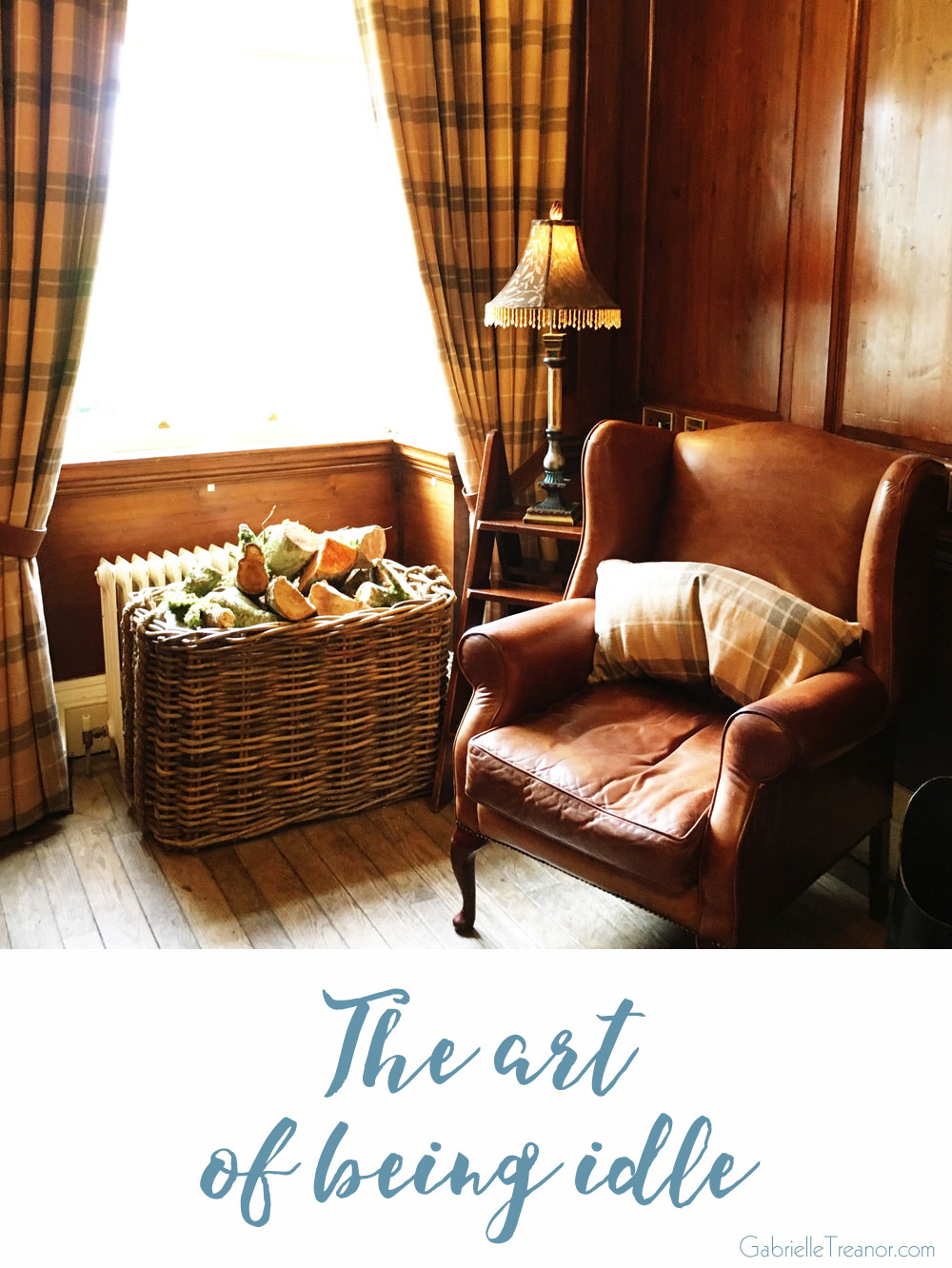 As an adult it’s very rare that we find ourselves facing a weekend with nothing to do, nowhere to go, no people to see, hours of idleness stretching ahead of us. There’s always something we could be doing – housework, DIY, gardening, food shopping / preparing / cooking, chores of some kind, running errands.

No reason to be bored
It’s easy to fill our time in this digital age because even without something specific to occupy us we can turn to social media and the black hole that is the internet to entertain us. Wherever you are, there’s no reason to be bored. If you’re in a queue or waiting for someone there’s no need to twiddle your thumbs when you can put them to use scrolling through your social media, texting a friend or playing games on your smartphone.

Curiously, hopping online to alleviate the onset of boredom can actually make the problem worse. Looking for hit after hit of entertainment, approval or reassurance from checking for likes and comments on social media to watching funny cat videos, actually makes it easier for us to feel bored because we expect constant stimulation.

The glorification of busy
How does this constant activity, mental or physical, affect us? Are we in a persistent state of busyness out of necessity or out of a fear of being bored? Do we worry we look lazy if we’re seen to be idle? Will the devil, in fact, make work for our idle hands?

The glorification of busy can make us feel anything else isn’t good enough. Being idle has negative connotations, suggesting a lack of purpose, drive and imagination. It can make us look downright lazy, we think.

It can be argued that having nothing to occupy us for a long period of time isn’t good for our mental state. Without diverse mental stimulation it’s possible to slip into mindlessly over-eating and drinking, or staring at a screen to numb the bored feeling. While being idle doesn’t necessarily mean that you’re lacking in purpose, persistent boredom can whittle away motivation and lead the way to a melancholic lethargy that gets harder to shift as time goes on.

But how do we feel about being bored for just a short period of time? Even if we aren’t concerned with what others think of our idleness, do we worry about how we’ll feel if there’s nothing to occupy our brains? If we have nothing in particular to think about, will we then find ourselves thinking about things we don’t want to think about?! Does being alone with our thoughts scare us a little?

The benefits of boredom
Research has shown that being bored can be beneficial to us. In particular, if you have an issue playing on your mind or a problem to solve, leaving it alone and letting your mind daydream is a better tactic than trying to force a solution to appear. Psychologists have found that the areas in the brain associated with complex problem-solving become more active when we daydream. Ever wondered why you have such great ideas in the shower? It’s because your mind is left unoccupied so it can wander freely, and by doing so take paths and make connections it wouldn’t necessarily find when concentrating.

If you want to increase your creativity, let yourself experience idleness. When children are given free reign to use their imagination, rather than external stimulus, to fill their time, their creativity fires up, inventing universes, characters and stories in their imaginative play.

In 2013 a study by the University of Central Lancashire found that boredom increased creativity in adults. Two groups of people were asked for inventive ideas for the use of polystyrene cups. The group that was given a boring task to do beforehand was more creative in their ideas. In the second stage of the study another group of people were given a boring task that left them open to daydreaming and they became even more creative.

Rather than being a waste of time, being idle and allowing your mind to wander can be more productive than giving your brain constant stimulus.

How to be bored
Now that we can see that idleness may actually be a good thing, how do we make boredom happen?
• Ease yourself in gently (boredom cold turkey might be a shock to your over stimulated system) by trying it for short periods of time first. If it would reassure you to know there’s a definite end point to your idle time set an alarm, perhaps for 15 minutes to begin with.
• Turn off all external chatter – email and social media notifications, your computer, TV, radio, and put away your smartphone. You can make it easier on yourself by being in a different space to your phone, if the situation allows. If you can hear or feel your phone buzz with notifications you’ll be preoccupied by them and tempted to check.
• If you don’t feel ready to just sit and be, a gentle way in to boredom is to carry out a dull and repetitive activity, something that needs very little cognitive effort. You could try washing by hand every piece of cutlery you own, draw the same simple shape on a piece of paper over and over, or sort mixed up Lego pieces into stacks of colour.
• For maximum boredom, and to allow daydreaming, simply stare into space and stop making any more effort. Don’t try to empty your mind but also don’t force your brain to think of anything in particular. Go with the flow and let whatever pops into your brain have free rein, let your mind wander where it pleases.

So the next time you find yourself at a potential loose end, don’t reach for the nearest digital device, gaze up at the clouds or stare down at your feet and just let yourself be idle.

Fed up with over-worrying? Get your mini guide to mindfulness now

I’m Gabrielle and I’m a mindset and positive psychology coach as well as a writer and teacher. I’m here to help free you from the overwhelming stresses of a busy life and mind that get in the way of you feeling the joy, ease and contentment you really want… Read more

Fabulous FREEBIES!
I've made some amazing free resources for you to feel more calm, peace and ease…
Get free goodies!
Fancy joining me for a walk? This is one of our f

What might we regret in the future and what can we

🤯 When we've got so much to do, people needing

To do lists are useful, they hold you accountable

True story, folks. Don't be like I was! I wish I

Our society tells us that we need to be doing more

You know that feeling of never having enough hours

We can know with every fibre of our being what we