You make more of an impact than you think

You make more of an impact than you think

We may not realise it but how you are, what you say and do, has an impact that goes beyond those immediately around us. So not only do we affect others when we’re tired, overwhelmed or stressed, but also when we’re energised, relaxed and happy…

Hello and welcome to episode 71.

First up I have something exciting to tell you! I’m creating a new course which is all about helping you to feel calm, in control and confident you can cope. Everything I share will make a difference to you right now in the midst of the global pandemic AND it all applies to life going forward with whatever is challenging you and adding to your stress and overwhelm.

You’ll discover what’s going on inside your head (as well as outside in the world) that’s making you feel overwhelmed, how to recognise your hidden stress symptoms and why it’s so important you don’t ignore them. You’ll learn how to help yourself feel calmer in the moment and long-term, what you can do to feel more in control in an uncertain world, and how to build your confidence so you feel strong and able to cope.

The online course is called Rooted because that’s exactly how it’s designed to make you feel – rooted and strong, calm and peaceful, empowered and in control, and confident that you can cope with whatever life throws your way.

So, the course is open for pre-orders now and as an extra treat there are two bonuses available! You can find out all the info about Rooted by going to gabrielletreanor.com/courses.

Now, one of the things I learned from positive psychology early on, and which really stuck with me, was the ripple effect. Not in the butterfly-flaps-its-wings-and-on-the-other-side-of-the-planet-there’s-a-tornado kind of a way because that feels a bit too philosophical for me, I get lost in how that actually works in real life.

The ripple effect as it’s explained in positive psychology is more practical, it’s that how you are has an impact on the people around you, it ripples out to them. So if you’re in a good mood, feeling upbeat and chipper, that will rub off on the people closest to you. But it doesn’t end there.

That is why the idea of taking care of yourself and your needs being selfish doesn’t stack up because when your own needs are met and you feel good, not only do those closest to you benefit from a calmer, happier you, so do people three steps removed from you!

In case this is still sounding a bit idealistic and theoretical and you’re feeling sceptical let me share an example.

So last year I spoke on a panel at an event run by the organisation I did my coach training with. It was a fantastic day in London, it was amazing to finally meet people I’d only known online and to hear some truly inspiring speakers talk.

At the end of the event everyone was invited to drinks at a nearby bar. I’d had a brilliant day and I was pretty worn out, not surprising for this introvert, so I decided I would go straight back to my friend’s house where I was staying rather than carry on to the bar.

Now, in years gone by I would have stayed out and gone for drinks because I thought I should. I’d have thought that it would be rude and anti-social of me not to. I’d have worried what people would think of me, and I’d have told myself that I couldn’t go home just because I was tired. And then I’d have felt more tired, and stressed about being tired, and feeling irritated with myself that I was tired, and wishing I could just be tired in peace on a comfy couch at my friend’s instead.

I’d have done my best to cover up how I was really feeling and acted like all was fine to everybody else when it really wasn’t.

But that’s not what I did this time.

Instead, as I hugged people goodbye (remember when we used to hug?) I told them that I had loved and appreciated every minute of the day and that I was full to the brim with inspiration. I said I was all peopled out so I was going to take my introvert self home, and that I hoped they’d have a brilliant rest of their evening.

And what was so interesting was the response I got. All those years in other situations I pushed through because I thought I’d be criticised and people would think me rude or boring or weird or anti-social. But that’s not what happened.

Instead the response I got was one of acceptance. They took what I said, accepted it and hugged me back. Maybe they were thinking terrible things about me, maybe they weren’t, I don’t know. I certainly didn’t get that impression from their behaviour and because I knew I was doing what was right for me, in a way that was in keeping with my values of kindness and gratitude, I didn’t need to put energy into worrying about what I didn’t know.

And what was even more interesting, and this is where we get to the ripple effect, was that by being honest about how I was feeling it gave permission to other people to be honest about how they felt too. So one woman told me she knew she had about an hour’s worth of energy left and then she’d be heading home as well. And someone else responded by giving me a big smile and telling me she felt exactly the same, her heart was full to the brim and now she couldn’t wait to lie on her bed in silence.

The reaction of one woman, younger than me, will always stick in my mind. As I told her I was taking my empty introvert batteries home I saw almost a light spread across her face. She said that she had been thinking she ought to go for drinks but actually what she felt was exhausted.

Hearing me be honest about how I felt – being thankful for the wonderful day, unapologetic for needing to rest and recharge, and how I expressed it – gave her a lightbulb moment that she was actually allowed to do what she needed. Which was to go home and flop, not stand in a bar feeling more worn out by the minute while trying to pretend she wasn’t.

So by being open about how I felt I had given permission to others to be honest too, and to do what felt right for them. That’s the ripple effect.

That wasn’t why I did it, I’d no idea that young woman was thinking or feeling that way. But it just shows the impact that we can have on other people, the positive difference we can make when we trust in ourselves and live true to ourselves.

This is just one example and I see and hear it from the women I work with who notice how the way they are, how they treat themselves, how they speak up for their needs or desires, how that ripples out to the people around them.

It makes perfect sense when you think about it. If you’re utterly worn out, you’ve no energy, you’ve no patience, those closest to you are going to be affected by that. And likewise, when you’ve been taking care of yourself and so you have more energy, you’ve been doing what makes you feel happy and uplifted, when you honour your values and boundaries, your whole way of being is going to have an impact on those around you.

As I said at the start of the episode, my new course, Rooted, which is all about helping you to feel calm, in control and confident you can cope, is open for pre-orders and includes bonuses! So, go to gabrielletreanor.com/courses to find out all about Rooted. I’ll put a link in the show notes too. 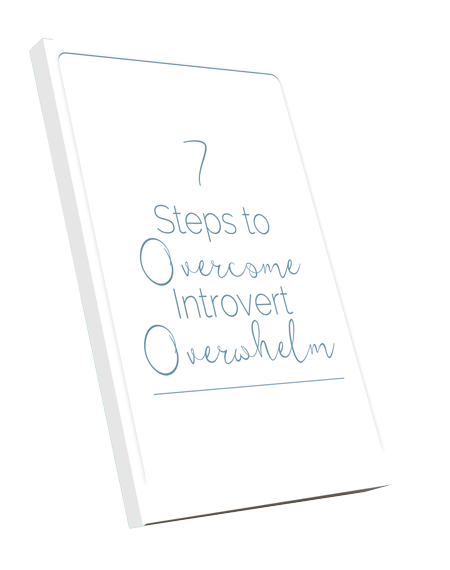