Taking a month off social media

I decided to take all of August off social media (the first time in 12 years) and the month is up. Am I raring to log back into the apps or am I staying off it for life? (You can read my first post one week in to the sabbatical here).

Neither! Because, like most things, it’s not that clearcut. It’s certainly been an interesting experiment, I’ve become more aware of my relationship with my phone and the impact social media has on me. How I use and interact with the apps will be different from now on but only time will tell if the changes stick…

So, how did I go about it, what did I gain or lose and what’s the plan going forward? 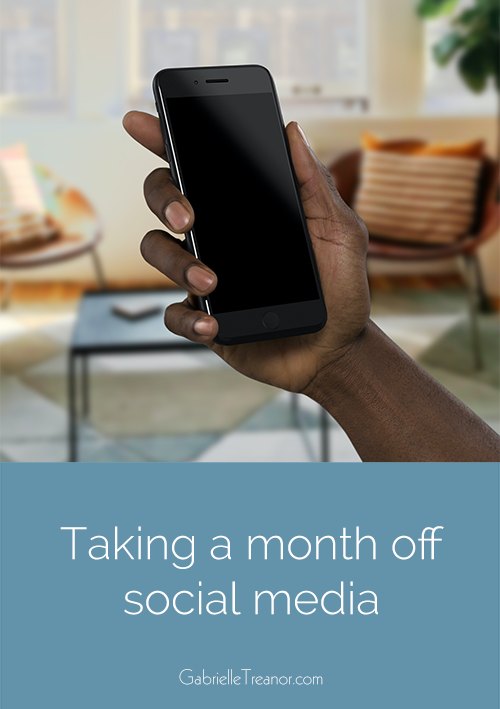 Let’s start with the stats. According to Screen Time I’ve spent less and less time using my phone as the month went on, by the end of August I was on my phone nearly half of the time in July. Interestingly the number of pickups has remained about the same, not sure why that is!

I found it easier than expected to stay off social media because I made it so hard for myself to log on. Deleting the apps from my phone and blocking them on my computer meant that I didn’t even try to log in because it would be difficult to do so. I can’t know for sure but I think the temptation would have been greater if I had kept the apps on my phone. So why not make the sabbatical as easy as possible to stick to?

At the start of the month FOMO was a thing! I was wondering what posts I was missing, what were people up to, was I missing messages or comments, was I making a terrible mistake… But those feelings vanished pretty quickly. I was surprised and a little amazed how by the end of week one I was hardly thinking about social media at all.

I noticed that a lot of the story-telling I had been doing around comparing myself to others, how successful or not I am, what people think of me, what I should be doing… simply melted away. I feel calmer, I can think more clearly and my emotions feel on much more of an even keel – due, I’m sure in some part, to the reduction in noise and story-telling that being on social media can provoke. Plus I’m more in tune with my emotions which means that I can take action to support however it is I’m feeling.

I haven’t had any huge epiphanies but I’ve definitely had some powerful moments of insight and clarity around my work which I’m still musing on.

Because I’ve spent less time on my phone I haven’t felt the need to have it with me so much. I was in the habit of putting it in my pocket any time I left a room so it was always with me. But, noticing this habit, I started to consciously leave it behind which felt quite freeing in a way.

It took a while to get into the habit of plugging it in to charge at night in my study rather than on my bedside table and it felt weird to be so disconnected! (A sure sign it was needed.) But I’ve grown to really like not having it in the bedroom. There isn’t the opportunity to disappear down the rabbit hole of emails or social media so it’s helped me to switch off more easily at night and have a calmer start to my day. This is something I’ll definitely be continuing.

I’ve also read more. Reading is possibly my favourite pastime and yet I often push it down my priority list because there are other things that need doing, or that I think I ‘should’ be doing. But, gaining several hours back each week means I’ve had more time to read which has been a total joy. And because of reading more I’ve felt more relaxed and it’s sparking more ideas and insights.

While I haven’t been connecting with people on social media I have been connecting more in other ways. I’ve really enjoyed writing my weekly letters to my email subscribers and as well as having Zoom conversations I’ve also been sending out notes via good old snail mail. Writing postcards (and getting some post back in return!) has been a joy. I meant to do it in the past but didn’t quite get round to but it’s something I want to keep going.

I think the only thing I’ve missed is the connections that I have on social media. Just being able to see what some of my Instagram friends are up to and their non-business posts has been something I’ve missed.

I signed up for a lot of newsletters before the start of my sabbatical and there are many that I haven’t received, presumably because they haven’t been sent. Which means that by not being on social media I don’t know what some of the businesses I follow are doing or what products or services they have for sale that I might want. Which means they could be missing out on my custom!

So if you’re reading this and you have a business and you don’t have an email list or send emails, please consider starting now. It’s such a valuable way to connect with your audience and you could be missing out on people who want what you offer but don’t know about it because they’re not seeing your posts (even if they’re on social media the algorithm may not show them).

I also noticed in some of the newsletters I read of live talks, interviews or communities being held on social media, like on IGTV or in a Facebook group. So again, those not on social media (or seeing the posts) wouldn’t be able to join the live sessions or the community. But perhaps if they were held on a platform like Zoom, Crowdcast or Mighty Networks those businesses could reach and speak to more people?

The other part of connection I’ve missed by not being on social media is sharing what I do and how I help. There are various ways I communicate with people who could gain from what I share on overcoming overwhelm so you can feel more calm and joy – weekly emails, blog posts, Pressing Pause podcast (new episodes are on their way!), freelance writing etc. – so I’m not reliant on social media at all. But being absent from social media does remove an opportunity for people new to me to learn of the resources and support I share and offer.

So, to answer the question I posed right at the start of this, yes, I am returning to social media. BUT in a more intentional way than before.

I will be paying close attention to how much time I spend on the apps and, importantly, what I do while on them. I have a rough idea of how often I want to post but I’ll see what feels good as I go along.

Connection is what I missed during my sabbatical so that is my number on priority. And I hope to keep up my awareness of how being back on social media affects how I think and feel. I want to keep listening to my intuition and not let it get crowded out by the noise of other people’s posts and stories I might tell myself from them.

I’ll edit the list of accounts I follow to ensure I’m following people whose posts I really want to see and I’ll investigate what other tools could be helpful, like the mute option which I’ve never used.

Overall I’m really, really glad that I took a month off social media. I’ve benefited so much from the time I’ve gained back and the quieter headspace it’s given me without all the noise (you just don’t realise how much noise there is until it suddenly goes quiet). I’ve had ideas, insights, created and completed work I’m proud of and spent my time in ways that felt good and right for me. And it certainly increased the calm and joy I’ve felt!

I’m interested to see how it feels to be on social media again, intentionally, mindfully and on my terms.

So if you’d like to connect with me Instagram is my main social platform where I’m @gabrielletreanor, and I’m also on Facebook here and LinkedIn here.

However while I may be returning to social media the BEST place to follow and connect with me, and where you can discover how to swap overwhelm for calm and joy, is in my regular emails which you can sign up to receive here. You can take your pick of the free resources I’ve created for you and it’s in my emails where I share news and special offers first before anywhere else including social media.

I've made some amazing free resources for you to feel more calm, peace and ease…

Take me to the free goodies!