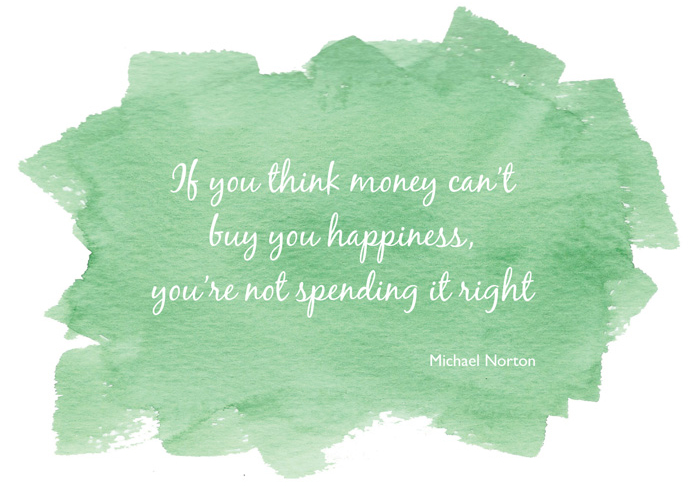 In a study carried out by Michael Norton and his colleagues at Harvard Business School, they gave money to some people and asked them to spend it on themselves, and then told others to spend the money on other people. The researchers found that the people who spent money on others experienced greater feelings of happiness than those who spent the money on themselves. The research also showed that the amount of money you spend doesn’t matter. You feel happier spending on another person, whether it was a value of £5 or £25. You can watch Michael’s TED talk here, it’s had nearly three million views, it’s pretty eye-opening stuff.

Another finding from this study was that it didn’t matter what you spend the money on. Buying something that constitutes a small gesture or spending money on something considered more important doesn’t change how much happier you feel.

So, spending money on other people makes you happier than spending it on yourself. Regardless of how much you spend or what you buy. This makes sense, think about it for a moment. When you buy a friend a gift for no particular reason other than you want to, it feels great, doesn’t it? Treating a family member or work colleagues makes you feel good because you know you’ve made their life a little bit easier or happier, and that knowledge makes you feel happier too. And we know that donating to charity, which is still spending money, makes you feel good as well as doing others good.

The next time you’re feeling fed up and take yourself off to the shops to buy yourself a treat, perhaps think about buying a little something for someone else too. You could increase your happiness by sharing it with another.